I sat down to write an essay about my favorite show, Supernatural.  And then I started at a blank screen for several minutes, realizing the Herculean task I had just set myself.  How can I put into words what this show has meant to me and so many other fans?  Where do I begin?  There’s a lot of ground to cover.  This might become an ongoing series of essays, but for now, let’s start at the beginning…

In 2005, a show debuted after Smallville on the WB, so I watched it because I like monsters and it might be a good show.  Over a decade later, I am still watching.  Supernatural has been a constant in my life and I’m sad to know that it will soon end.  But that will never take away what it means to me.  It is a safety blanket, a source of entertainment (and some frustration), and a link between me and every fan out there.

In the beginning, there was Sam and Dean, cruising the backroads of America in search for creatures that went bump in the night.  From these humble origins, the lore of the show added demons, angels, heaven, hell, and alternate dimensions.  But the evolution was logically, as the world of the boys expanded.  As a fan, I relish a good lore.  That’s probably what attracts me to Harry Potter and Buffy and so on.

The cast of two expanded into three, then four key characters, including an angel named Castiel and the future king of hell named Crowley.  Family, a key theme of the show, remained at the forefront as other characters populated the world of the show.  Characters like Bobby, Chunk, Charlie, Sheriff Jody, and others became family.  Actors who joined the cast could look forward to an adoring fandom; the only despised character, Metatron, might be the exception.

The show became self-aware, and I loved it for that.  It nodded at its audience all the time, including a meta episode that introduced Chuck (“Monster at the End of the Book” 4.18) and a musical episode where the boys see their lives played out in song (“Fan Fiction” 10.5). 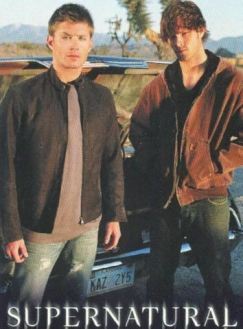 There were two attempts to create spinoffs to Supernatural, neither of which took off.  I loved the ideas of another show set in the same world, but I don’t think it would be the same without Sam and Dean.  The look and feel of the show, the world, is only part of the show.  The relationship between Sam and Dean, and, by extension, Jared and Jensen, is the core of the show.  Their self-sacrificing ways have become a cliché of the show, but that love is the heart of it all.  What started as a search for their father—which sets the ball in motion—becomes a fight for the world and everyone in it.

These are my initial thoughts on the series, but they are far from all I have to say about Supernatural.